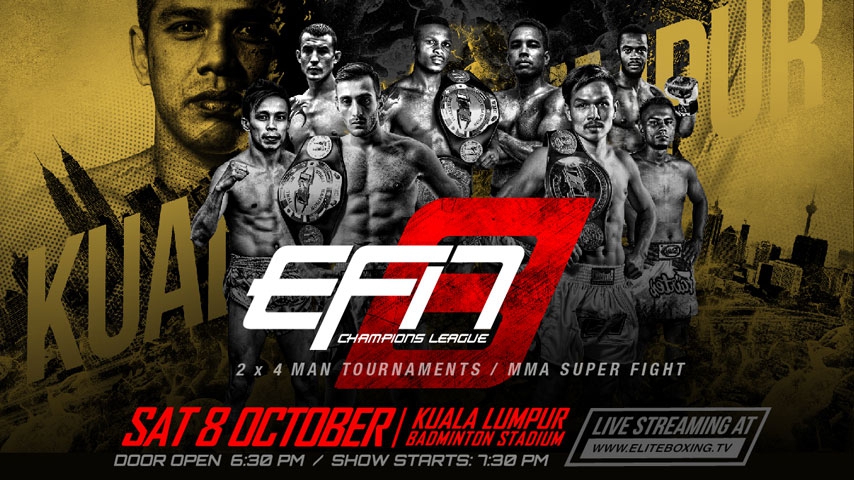 Once again featuring both Muaythai and MMA fights on the bill, the 2016 Elite Fight Night (EFN) Series heads to Malaysia on October 8 for the third of four regional qualifiers on the road to twin year-end finales in Bangkok and Abu Dhabi.

Having launched with EFN6 in Thailand on August 12, EFN 2016 then moved on to Bulgaria for EFN7 on September 24 for the second event of the joint Muaythai and MMA series. Following EFN8 in Kuala Lumpur, the last of the qualifiers will take place in Sao Paulo, Brazil to determine the final places for the two series-end finales.

The MMA final will take place under the Abu Dhabi Warriors banner in the UAE capital on November 22, while the Kings Cup Final in Bangkok on December 5 will determine the EFN 2016 Muaythai champion.

EFN8 has been produced by series organizers Elite Boxing in conjunction with local partner, Leko Beh, the owner of Dragon Fight Club and a passionate supporter of Muaythai in Malaysia. Elite Boxing co-founder, Toli Makris, commented “We are really grateful for the support from Leko. We always receive a warm welcome in Malaysia and great support from sponsors, fighters and of course the local fans.”

Indeed, it is the fourth year in a row that Elite Boxing has staged an event in Malaysia. Having first brought their TVC brand to Malaysia for a Thailand VS Asia event in 2013, EB has returned with an Evolution event in 2014 and introduced EFN last year.

“We have promoted all three of our main brands here,” said Makris. “However, it is the first time for us to bring MMA to Malaysia. The new format of EFN will also help us to attract an MMA audience and we know that there is huge following for MMA in Malaysia.”